You’ve heard of mother’s intuition.  Well, I had a feeling Colton would be allergic to eggs.  We don’t have a family history of food allergies, I haven’t been particularly cautious about introducing other foods to my kids, I had no real reason to think that July 5th would have gone the way it did.

But here’s the crazy thing… I prepared the eggs, I sat him in his high chair, I unlocked my phone, punched in 9-1-1, fed him his first bite and then hovered over the call button.  I watched him, holding my breath.  One bite, two bites, three bites… phew…  Okay, he’s fine. Weird, I guess I’m just paranoid… probably just read one too many mommy blogs… he’s fine… …but… wait a second… 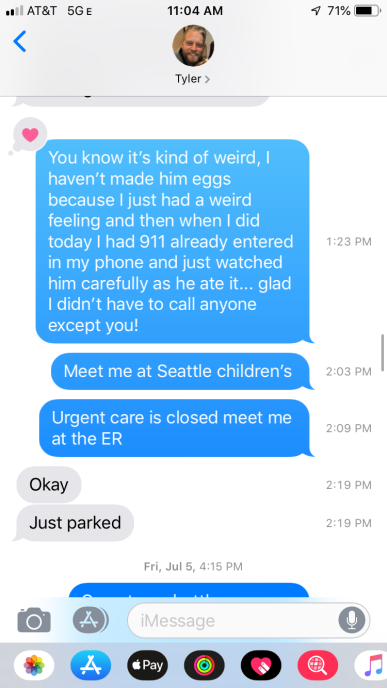 How did you find out he was allergic to eggs?

Hives are fairly common – how did you know to bring him to the hospital?

Will he grow out of it?

Can he have eggs baked into things?

Is he allergic to anything else?  How do you know what he can and can’t eat?

What happens if he sneaks a bite of a cookie that has egg in it?

Is there anything you can do to make him less allergic?

We remain SO grateful that our boy is overall healthy and well and that we live just 10 minutes away from Seattle Children’s Hospital (6 minutes if you go 75mph down Sand Point).  My intuition told me to call 9-1-1 and next time, I won’t hesitate.  If I’m honest, I still have this visceral reaction when I spot someone eating eggs, when I walk past a cobb salad in a store or read the words “with aioli” on a menu.  I hate them and I hate what they did to my son.  I know that sounds pretty crazy but it might be coming from the same inner protective place that hovered over the call button after preemptively dialing 911. I’ve learned so much about food allergies, my son and myself in the last three weeks and know I’ve just scratched the surface (no allergen testing pun intended).